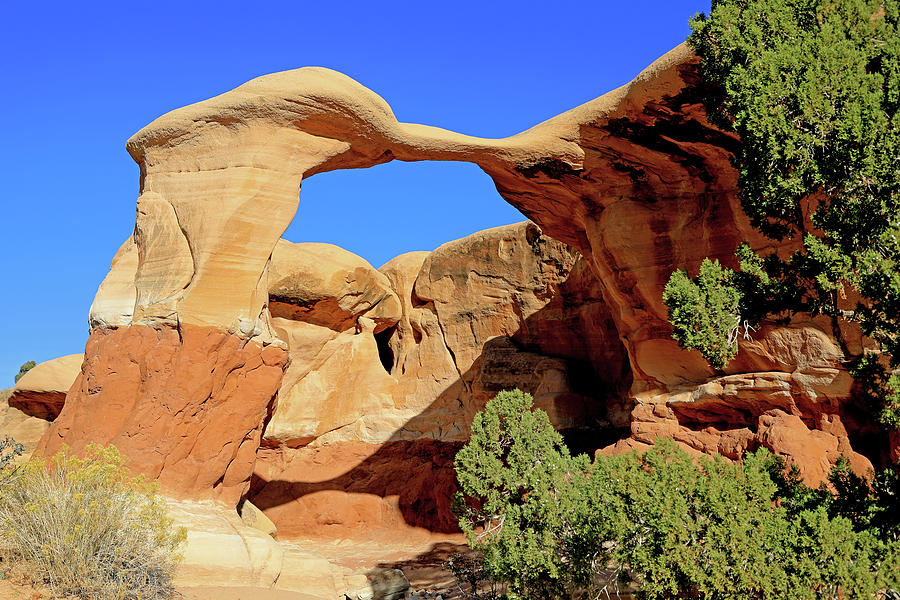 The Devils Garden of the Grand Staircase–Escalante National Monument (GSENM) in south central Utah, United States, is a protected area featuring hoodoos, natural arches and other sandstone formations. The United States Geological Survey (USGS) designated the name Devils Garden on December 31, 1979 The area is also known as the Devils Garden Outstanding Natural Area within the National Landscape Conservation System.
The formations in the Devils Garden were created, and continue to be shaped, by various weathering and erosional processes. These natural processes have been shaping sandstone layers formed more than 166 million years ago during the Jurassic period's Middle epoch.
The Bureau of Land Management (BLM) administers the Devils Garden and the entire GSENM which is the first national monument assigned to the BLM
The Devils Garden is located about 17 mi (27 km) by road southeast of Escalante, Utah To the west of the area are the Straight Cliffs which define the eastern edge of the Kaiparowits Plateau. To the east of the area is the Escalante River whose tributaries have formed many slot canyons. To the north is the Dixie National Forest and to the south are the Hole-in-the-Rock and Lake Powell which are located within the Glen Canyon National Recreation Area. The Devils Garden is situated at an elevation of 5,243 ft (1,598 m) above sea level in Garfield County, Utah.The area measures 640 acres which is equal to 1 square mile (2.6 square kilometres).
The Hole-in-the-Rock Road is the main access road to the Devils Garden. The unpaved road heads southeast into the national monument beginning at its intersection with Utah Scenic Byway 12 about 5 mi (8.0 km) east of Escalante. After traveling about 12 mi (19 km) along the Hole-in-the-Rock Road there is a road to the right leading to the Devils Garden area. The majority of the interesting sandstone formations are located in a compact area adjacent to the parking lot.

Thank you, Judy, for featuring this image in USA Photographers ONLY on FAA

Thank you, Victoria, for featuring this image in Landscape and Seascape Photography Only on FAA.

Beautiful with the saturated and contrasting colors!