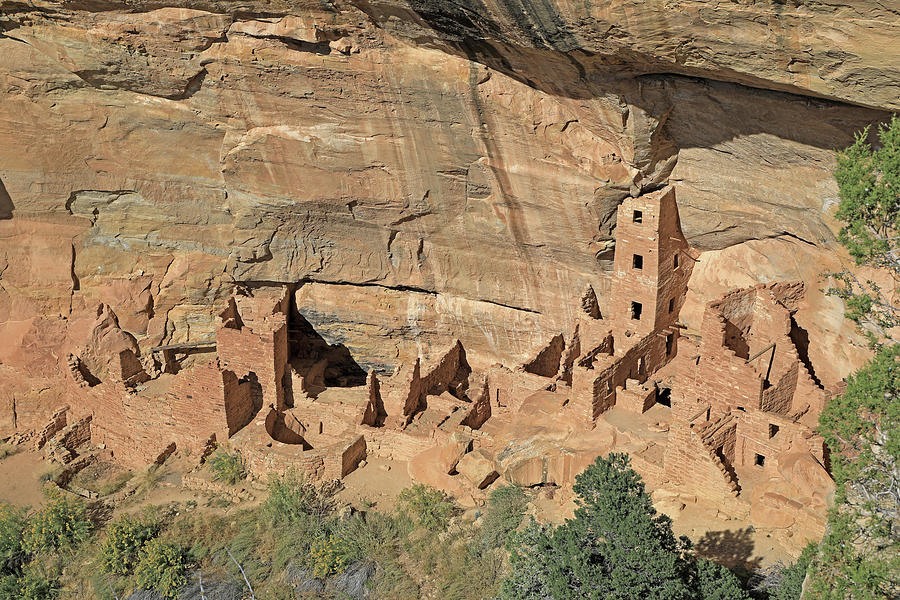 Mesa Verde is an American National Park located near Cortez, in extreme southwestern Colorado. It was established in 1906 by President Theodore Roosevelt. It contains some of the best-preserved ancestral puebloan archaeological sites in the United States. The park has also been designated a UNESCO World Heritage Site.
The park occupies some 52,000 acres with more than 5000 archaeological sites including 600 cliff dwellings.
Starting in 7500 BCE Mesa Verde was seasonally occupied by a group of nomadic Paleo-Indians. Later Archaic people established semi-permanent rock shelters in and around the mesa. The Mesa Verdeans survived using a combination of hunting, gathering and subsistence farming of crops such as corn, beans and squash. By the end of the 12th century they began constructing the massive cliff dwellings for which the park is best known. By 1285 they had abandoned the area following a period of social instability and severe droughts.
The cliff dwellings are a series of structures built inside rock alcoves. The interiors were mostly sandstone block held together with an adobe mortar. These structures are ama

Congratulations - Your beautiful artwork has been featured in the "Travel Art" gallery at Fine Art America! For further promotion, you can post it to the specific Travel Destinations galleries, our Facebook group and our Pinterest board - all the links are provided on our group's homepage: https://fineartamerica.com/groups/1-travel-art.html ** Want to post on our group's blog: travelartpix.com? Check the group's homepage for details!

Congrats! This photo has been featured on the UNESCO World Heritage Sites group on FAA/Pixels. • • • You are invited to archive your photo at the following Discussion Topic: https://fineartamerica.com/groups/1-unesco-world-heritage-sites.html?showmessage=true&messageid=4504216 ** OR ** https://pixels.com/groups/1-unesco-world-heritage-sites.html?showmessage=true&messageid=4504216