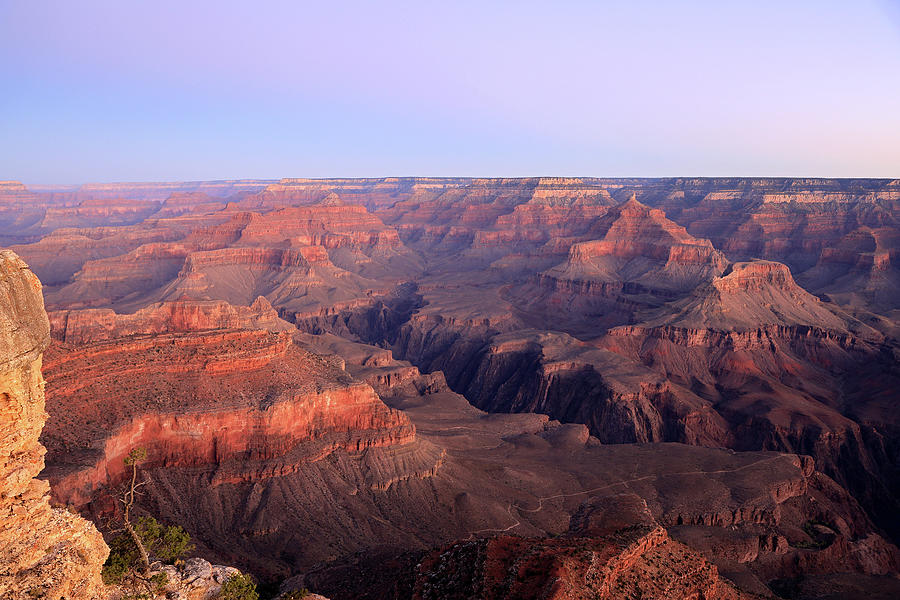 The Grand Canyon is an American National Park, so named in 1919, as the third American National Park. it is located in extreme northwest Arizona, U.S.A., and was also designated as a UNESCO World Heritage Site in 1979.
The Grand Canyon is a one mile deep, 277 mile long canyon formed by the Colorado River over millions of years, which also included the uplifting of the Colorado Plateau. The Canyon is 17 miles wide at its widest point and covers 1.2 million acres. It receives over 6 million visitors each year.
The Grand Canyon is divided into two areas - the North Rim and the South Rim. The North Rim is less accessible than the South Rim and thus receives far fewer visitors than the South Rim. The South Rim, which has a road some 33 miles along its edge offers several hotels and lodges, restaurants, and other tourist facilities. The South Rim has numerous view points, each offering unique and beautiful views of different parts of the Canyon. Most of these view points are easily accessed and not strenuous to visit. The main trail from the South Rim down to the Colorado River is by the Bright Angel Trail - not too bad going down, but really strenuous coming back up. At the bottom along the river's edge is a campground where those hearty enough can camp out for the night before the hike back up to the top. (Rafting trips down the Colorado River are also available and are great for those seeking a high level of adventure and an adrenaline rush.)
Trying to depict the Grand Canyon in two dimensions is an impossible task. It is so immense that the only way in which to really grasp its grandeur is by seeing it in person. No photograph or series of photographs can adequately describe one of the truly great Wonders of the World. The colorful rock strata, the varied shapes of the outcroppings, and the different color hues generated by the sun at different times of the day are difficult to show in photography (although I have attempted to do so in the series of photographs that I will present in this gallery).

Congrats! This photo has been featured on the UNESCO World Heritage Sites group on FAA/Pixels. • • • You are invited to archive your photo at the following Discussion Topic: https://fineartamerica.com/groups/1-unesco-world-heritage-sites.html?showmessage=true&messageid=4504216 ** OR ** https://pixels.com/groups/1-unesco-world-heritage-sites.html?showmessage=true&messageid=4504216