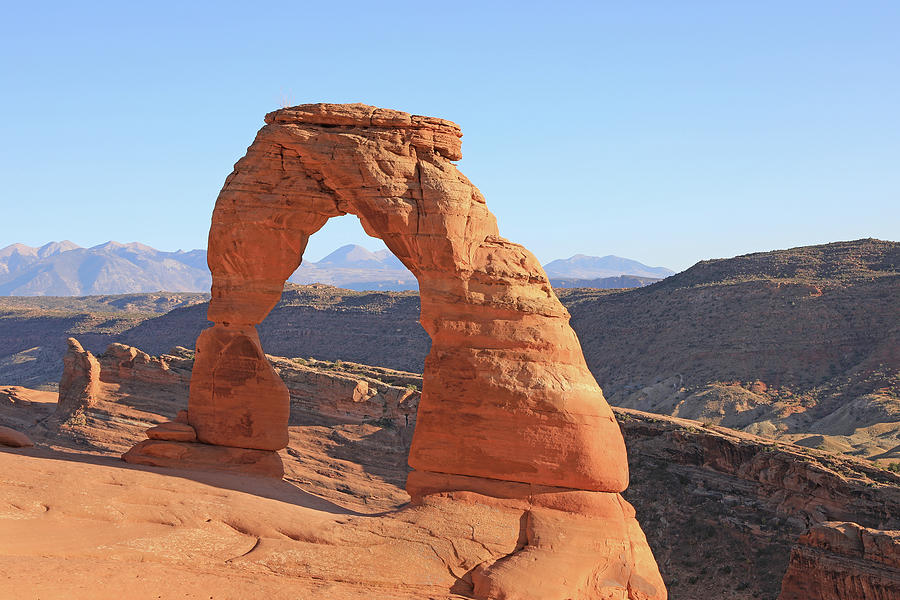 Arches National Park is an American National Park located near the town of Moab, in southeastern Utah. It consists of 76,679 acres of high desert plateau ranging in elevation from 4085 to 5653 feet above sea level. It is close to the Colorado River which flows from the State of Colorado through the Grand Canyon in Arizona, to the Gulf of California.
Arches was designated as a National Park in 1971, and has become one of the most popular parks in the system, hosting over 1.6 million visitors in 2018.
The park consists of over 2000 sandstone arches of varying shapes and sizes and many other sandstone structures as well. The geology of the park is quite complex. In summary the land on which the park rests was once under an ancient sea. Over the millions of years the land underwent an uplift and sea eventually evaporated. The exposed rock formations then eroded over centuries leaving the structures one sees today.
Arches is a traveler's delight - whether one likes to hike, drive, take photographs or simply admire the incredible beauty of nature. Arches has something for anyone who likes the great outdoors.

The Delicate Arch at Arches N.P. is probably the most recognized arch in the world. Its window is 46 feet high and 32 feet wide. In order to reach the Delicate Arch plateau one must hike a moderately strenuous trail for 1.5 miles, having an elevation gain of 480 feet. This is a "must" hike in Arches in order to be able to fully appreciate this magnificent natural structure. I made this climb in 2003, having only my "nice" film camera and was not happy with the results. I promised myself that I would return with a really "good" camera, and in October, 2019, I made the trek up the trail (not as easy after gaining 16 years in age), but I am thrilled with the results. I am extremely proud of this image and so happy that I made the climb again.

Thank you, Mariola, for featuring this image in 500 views - 1 image on FAA.

Excellent shot and a favorite!

Congratulations on your feature in 500 Views! FL

Your beautiful artwork has been featured in the "Travel Art" group's front gallery! Please post it in the respective travel gallery. For further exposure, check the Social Media links on our home page: https://fineartamerica.com/groups/1-travel-art.html

Thank you, Tatiana, for featuring this image.

Congratulations! Your fantastic photographic art has been chosen as a Camera Art Group feature! You are invited to archive your work in the feature archive discussion. There are many other discussions in the group where you can promote your art even further more.

Thank you, Luther Fine Art, for featuring this image in the Camera Art Group on FAA.

Refreshing perspective of this beautiful site!

Outstanding capture and artwork! Congratulations on your feature! Fl

Thank you, Gary. I am really proud of this one, myself.

CONGRATULATIONS! This piece has been FEATURED on the homepage of the group No Place Like Home, 8/11/2020! Way to go! Please post it in the Group's Features discussion thread for posterity and/or any other thread that fits!

Great capture! Congratulations on your feature!