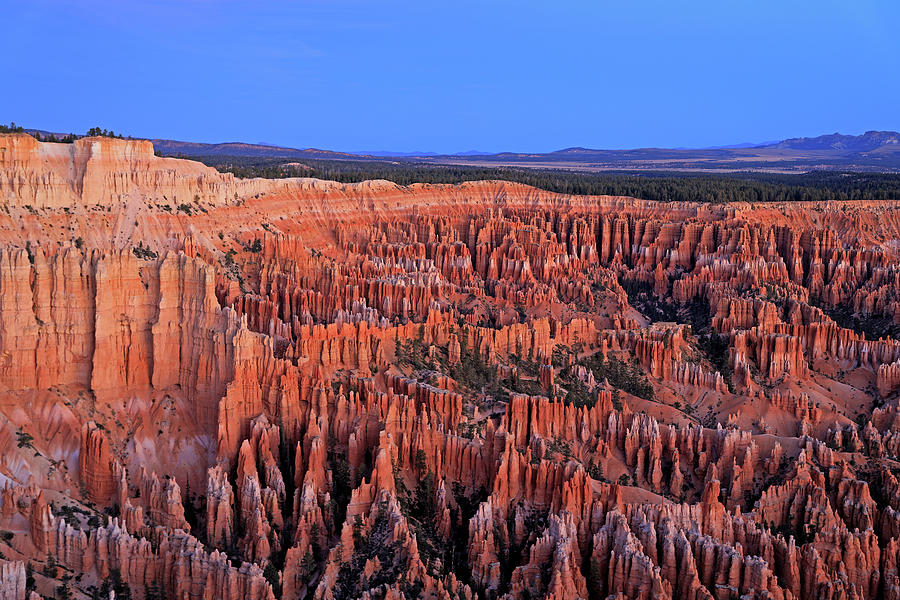 Sunrise at the Bryce Amphitheater as seen from Bryce Point, elevation 8300 feet. This incredible view of the Bryce Amphitheater at sunrise gives the viewer a brilliant orange glow from the early morning sun. Of all the fantastic vistas in Bryce this is my favorite, because it contains more hoodoos (literally thousands) than any of the others.
Hoodoos are tall, thin spires of rock that protrude from the bottom of an arid drainage basin. Hoodoos generally consist of relatively soft rock topped by harder, less easily eroded stone that protects each column from the elements. They generally form within sedimentary rock and volcanic rock formations. They are generally found in the desert in dry, hot areas
Bryce Canyon National Park is an American national park located in southwestern Utah. Bryce is actually not a canyon, but a collection of giant natural amphitheaters along the eastern side of the Paunsaugunt Plateau. It is home to the largest collection of hoodoos in the world. Tens of thousands of these structures are to be found in the various amphitheaters in Bryce.
Bryce Canyon was name a U.S. National Park in 1928. It covers 35,835 acres and ranges in elevation from 8000 to 9000 feet. In 2018, Bryce hosted 2,679,478 visitors. Because of its remote location it receives substantially fewer visitors than some of the other nearby parks. However, it is a unique place and one that is not to be overlooked by travelers to the southwestern U.S.A.

Congratulations on being featured in the FAA Group 'Promote Your Work Here and Get Noticed.' To ensure your feature remains available over time, post your featured image(s) in the Group's featured image archive (l/f and pinned, www.pinterest.ca/tendrelimages/01-promote-your-work-here-get-noticed/)

Thank you, Murray, for featuring this image in Promote Your Work Here and Get Notices on FAA.

Congratulations - Your beautiful artwork has been featured in the "Travel Art" gallery at Fine Art America! For further promotion, you can post it to the specific Travel Destinations galleries, our Facebook group and our Pinterest board - all the links are provided on our group's homepage.

Great shot! I am supposed to visit Bryce in June but may need to postpone til next year...pics like these make me want to go all the more!!!

I love the repetition of shapes. Very nice!