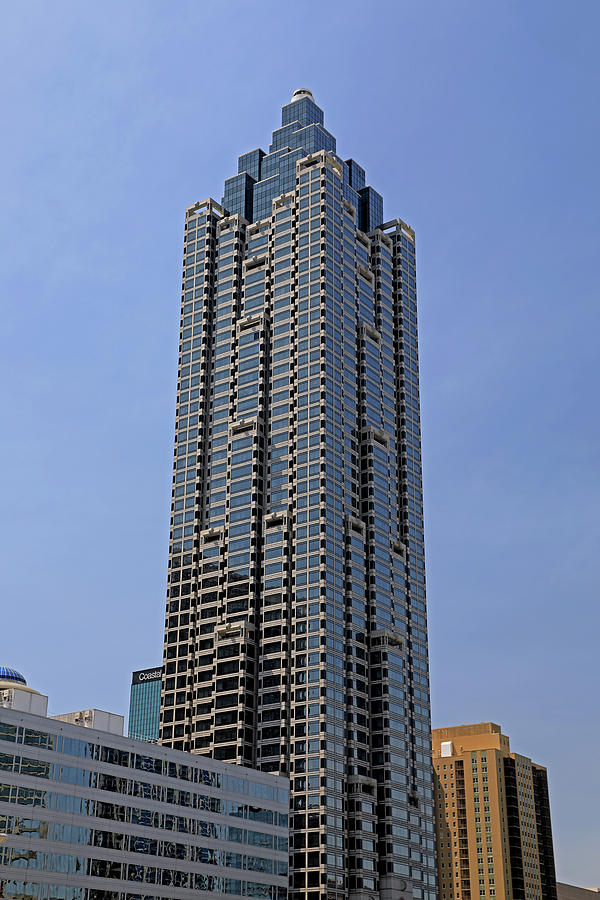 One Peachtree Center is a 265 m (869 ft) 60 story skyscraper in downtown Atlanta. Built as part of the Peachtree Center complex, construction was finished in 1992, and has been the second-tallest building in Atlanta since then. When completed, it was the 28th tallest building in the world, and 21st tallest building in the United States. Since Atlanta's tallest, the Bank of America Plaza, is located in nearby Midtown,One Peachtree Center is the tallest in the downtown area. The light on the top rotates. Architect and developer John C. Portman, Jr. originally conceived this building in the 1980s commercial real-estate frenzy as a speculative office building. Its basic design elements, a postmodern square tower with an elaborate base and crown, represented a departure for Portman from his earlier International-style work, and are said to have been inspired by Philip Johnson's wildly successful design for midtown Atlanta's One Atlantic Center.
Ground broke in 1989 with great fanfare, but by completion in 1992, the bottom had fallen out of Atlanta's real estate market and the building sat largely empty. His architectural firm, John Portman & Associates, located their headquarters in the building.
In the mid-1990s, Portman sold half his interest in the building to SunTrust Bank, which then moved its headquarters to the building. The two-level lobby is filled with many works of art, sculpture and furniture designed by John Portman.