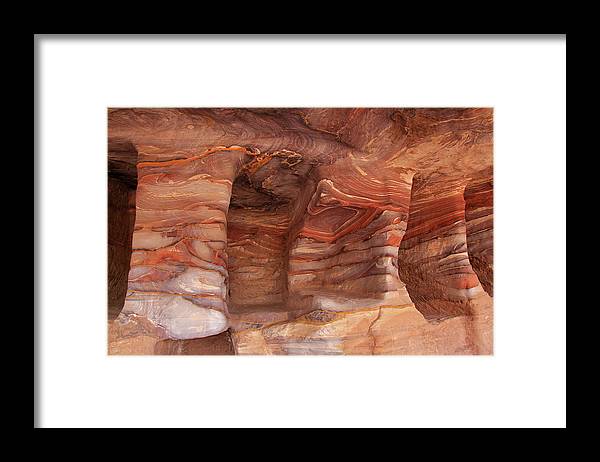 Petra, Jordan framed print by Richard Krebs.   Bring your print to life with hundreds of different frame and mat combinations. Our framed prints are assembled, packaged, and shipped by our expert framing staff and delivered "ready to hang" with pre-attached hanging wire, mounting hooks, and nails.

Thank you, James. Yes, the detail and rock patterns are amazing.

Petra, Jordan, the "Rose City" is a honeycomb of hand carved caves, temples, and tombs carved from pink sandstone in the high desert of Jordan some 2000 years ago. Little is known about the lost civilization that created this remarkable city; however they were known as the Nabateans, a nomadic desert people whose kingdom rose from these cliffs and whose incredible wealth grew from the lucrative incense trade. The Romans arrived in 63 B.C. and added much to the size of the city, including one of their trademark theaters. One of the remarkable phenomena of Petra was its intricate water system that supported some 30,000 residents. Petra was named a UNESCO World Heritage Site in 1985. This image depicts the gorgeous geological rock layers discovered during the excavation of some of the caves.