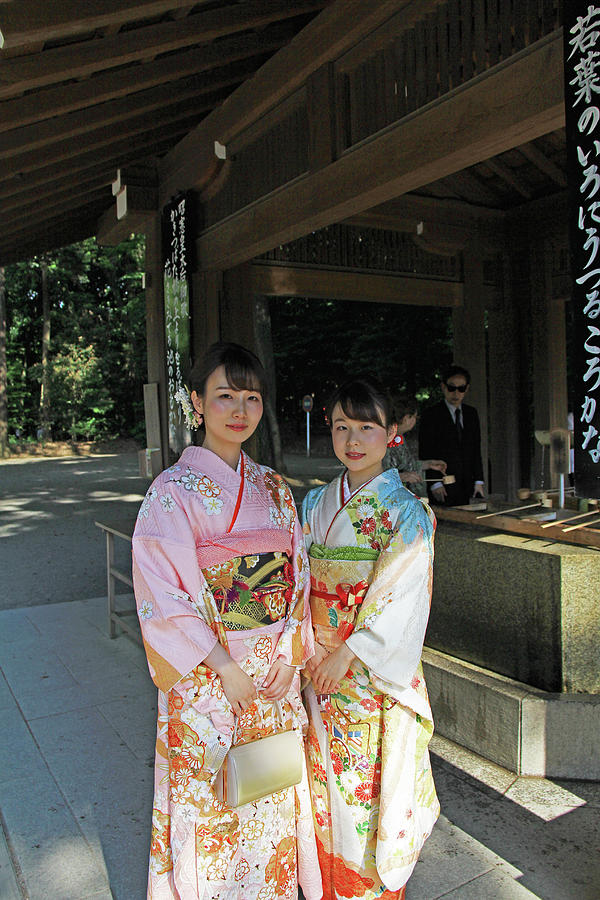 The Meiji Jingu Shinto Shrine in Tokyo is dedicated to the late Emperor Meiji and Empress Shoken. The shrine is part of a170 acre forest, planted with over 120,000 trees of 365 species that were donated by people from all over Japan. Construction was begun in 1915 and completed in 1921. The shrine was officially dedicated as one of great meaning and stood as one of the first rank of government supported shrines. Partially destroyed in WWII, the present building was rebuilt and completed in 1958.
The shrine itself consists of two areas: Naien is the inner precinct, which is centered on the main shrine buildings; Gaien is the outer precinct, which consists of a picture gallery, a variety of sports facilities and the Meiji Memorial Hall which is used for official meetings and weddings.
This image is of two girls about to take part in a special ceremony at the Meiji Jingu Shrine to commemorate their 16th birthdays. As this was happening three Shinto weddings were also taking place at the shrine.

This is a lovely photograph! L/F/Pinned.