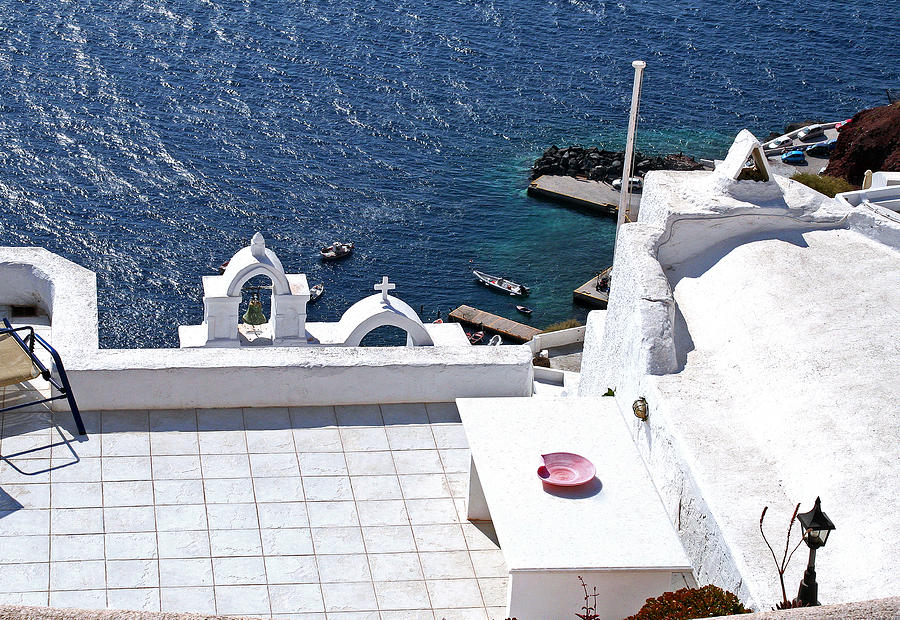 A private roof top deck on a home in Oia, Santorini, Greece
Oia is a coastal town on the northwestern tip of Santorini, a Greek Aegean island. The town has whitewashed houses carved into the rugged clifftops, and overlooks a vast caldera filled with water. In a 19th-century mansion, the Naval Maritime Museum has exhibits on local seafaring history, including old figureheads, sailors’ chests and models of old ships. Nearby is the ruined Oia Castle, known for its sunset views. It is built on the steep slope of the caldera and the houses and restaurants are built into niches carved into the caldera on the seaward side. There are narrow passageways and a central square. The sun light hours in this village are much longer than in the Fira town. Its paths are very narrow and hence gets congested during the tourist seasonThe idyllic surroundings of the town have a complex of white washed, blue domed churches and charming, traditional Cycladic houses and cave houses that are carved into the rock face on top of the cliff. It is set in a location which provides excellent views of the sunset over the caldera To the southwest, the Bay of Armeni, reachable from the town on foot or by mule, was once an important boat-building centre. Small repairs are now done on a single wharf. Excursion boats for trips around the island and ferries to Therasia leave from here. The harbour of Ammoudi on the western side of the town is reached by steep stairs north of Fort Londsa; there are a few tavernas and a pebble beach
The village is located on top of a hill, at about 150 m (490 feet) elevation, and known as the "Eagles nest" from where Palia and Nea Kameni volcanoes are seen and also the island of Therasia. It is situated to the north of the island and Fira is at distance of 11 km (6.8 miles). The main street in the town, in the central square, is the main trekking path which is cobbled, called the "Nikalaou Namikaou", which goes up the hill winding round the caldera. The island is reached from Fira which is the transport terminus of the island.